Everything in the garden was coming up roses at the Westfield War Memorial Village for the Armed Forces when it was visited by HRH Princess Alexandra recently. 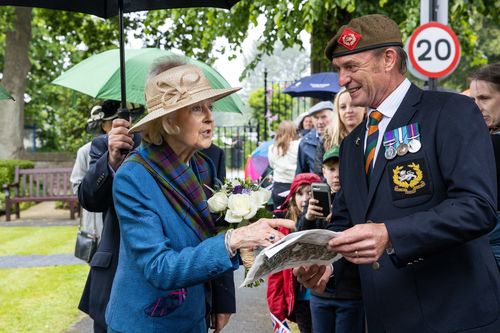 John Cockerham, Director of Customer Service Operations at Guinness, was among those on hand to greet the Princess at an afternoon tea laid on for her, staff, residents and trustees.

Princess Alexandra was there to officially unveil a commemorative stone to celebrate the village’s centenary and to recognise the role of philanthropy and charity in the welfare of the ex-Service community.

John, who was a housing officer at Westfield early in his 37-year career at Guinness, said:

“It was a pleasure to meet Princess Alexandra. She showed a real interest in the work Guinness does here and the residents were delighted to show her around. Personally, it’s been a privilege to work with the village and to see it grow and modernise over the years while keeping the needs of ex-Service personnel at its heart.”

Guinness manages the historic homes on behalf of the Westfield Memorial Village. The homes offer quality, affordable, rental accommodation to the Armed Forces community for Service veterans and all the gardens are looked after by Guinness staff.

The Village was opened to residents in 1924 by Earl Haigh with 26 cottages but today the village has grown to 113 properties.