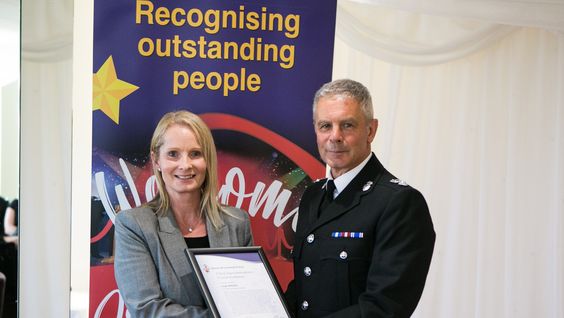 Leigh Rhodes, one of our Tenancy Enforcement Caseworkers from Plymouth, has been awarded a prestigious Chief Superintendent Commendation for her work with the local police to stamp out anti-social behaviour.

Following a number of incidents of anti-social behaviour in our homes in Newton Abbott, Leigh and her team were able to secure property closure orders (where a court stops any access to a premises because it’s likely to cause a nuisance). The court, who dealt with the case, also commended the team for the detailed evidence they produced.

As a result of the closures, people in the local community have thanked those involved for transforming the quality of life in their homes. The local press, who followed the case in detail, have reported a much happier local environment with no emergency calls to the police for disturbances.

Leigh was presented with her award by Chief Superintendent Keith Perkin at Devon and Cornwall Police’s annual award ceremony in Torquay.

Devon and Cornwall Police said: “Making our communities safe is our priority. It shows what can be achieved when agencies work in partnership together, as we have done with Guinness. Being better informed means we can all be more effective in dealing with issues that affect our communities.”

Leigh’s manager, Louise Morton, said: “It was an honour to attend the awards ceremony. The stories of those presented with awards were humbling and it is to her credit that Leigh has been recognised in this way. The tenancy enforcement team work hard every day to protect customers and communities so to be recognised for this work is amazing.”

Following the success of the team’s approach, other Housing Associations are now approaching us for advice on how to deal with similar issues at their properties. We’re equally happy and proud to share our experiences and knowledge to help them.